What are you grateful for?

Sal
Annual ophthalmology exam went well.
Know that my eyesight is fine,
Janet
Georgina who I met at the National Suicide Survivors Event on Sat. Text me, that she is soooo glad she met me.
Joan from the same meeting was glad I attended and happy to meet me.
I felt very accepted and appreciated for who I am.
Andrea
Support me
Make me feel better
denise
I am a regular client of theirs, at this dental clinic.
After I paid, she wished me "Happy Everything" (to cover Thgs, Xmas, other winter holidays) and with a big, generous smile.
I said, you, too, and see you (for my next cleaning) in the New Year.
It felt very genuine!
denise
This Thanksgiving week, I am trying to b mindful of all that I have and all the good things in my life.
Reflect, acknowledge
Jeremy
Liko founded a club at school that I'm not allowed to name because he wants it to have zero online presence (this is a very Gen Z desire). Their goal is to explore the Bay Area's liminal spaces, mostly abandoned structures. This usually involves a lot of trespassing.

A few weeks ago, Liko reconnoitered a former grain silo in San Francisco that is now a truck depot of some kind; yesterday, he led an expedition of his friends into the silo. When he got home, he showed me some pictures and video of their adventure (at one point, a truck pulls in and they all scurry into dark corners; in the video, you can only see the massive sinister shadow of the truck). We discussed the logistics of this expedition, and we talked about my own excursions...yes, the apple doesn't fall far from the tree. Then Liko said to me: “I told my friends that I really don’t think I can do anything to rebel against my dad.”

This is probably true. Liko has been raised by hard-partying polyamorous adults and I'm sure it's very strange for your parental figures to be more transgressive than you currently are, who actually encourage hobbies like mixing cocktails (when he showed an interest during the quarantine phase of the pandemic, I bought him a bunch of liquor and he went to town); it might seem unnatural. But what Liko doesn't yet realize that this seeming permissiveness doesn't come from nowhere.

When he was younger, I was actually a fairly stern, borderline-helicopter parent. As he's grown, I've let the leash get longer and longer, and I've done that because I really have grown to trust him. When the pandemic hit, he never questioned the need to mask or get vaccinated. During his cocktail-mixing phase, it never crossed my mind that he would drink to excess; I've never, ever worried about drug abuse. I trust him to trespass responsibility; Liko's more a "leave-no-trace" guy than someone who wants to break windows. He's always been eager to work and save money. I was extremely nervous when he went off to Europe by himself for a month, partially with his own savings, but I never for a moment doubted that he would be a responsible traveler. I fought back against my anxiety because I knew that I could trust him.

That's today's gratitude: I'm thankful to my son for being so trustworthy. When he was 14, he hung around this Army surplus store on San Pablo (now gone, though Berkeleyites will remember it). The owner ended up offering him a "job"--for a few hours on the weekend, Liko would fold clothes and sort inventory, in exchange for store credit. When the store was about to permanently close, I talked with the guy about Liko and he said to me: "You got a good kid there; I can spot the good ones. His fundamentals are sound." That's stuck with me, through our day-to-day ups and downs: Liko's fundamentals are sound. That means, among others things, that he's a very responsible rebel. I'm so, so, SO grateful that he's turned out that way. Not just for the "responsible" part, but for the "rebel" part as well. In my view, we don't live in a society where conformity is adaptive.

The attached picture is Liko on the roof of a building in Bayview-Hunters Point. This wasn't an official expedition of his club; he snuck up there with a friend just for fun, which is why I'm allowed to share the picture. 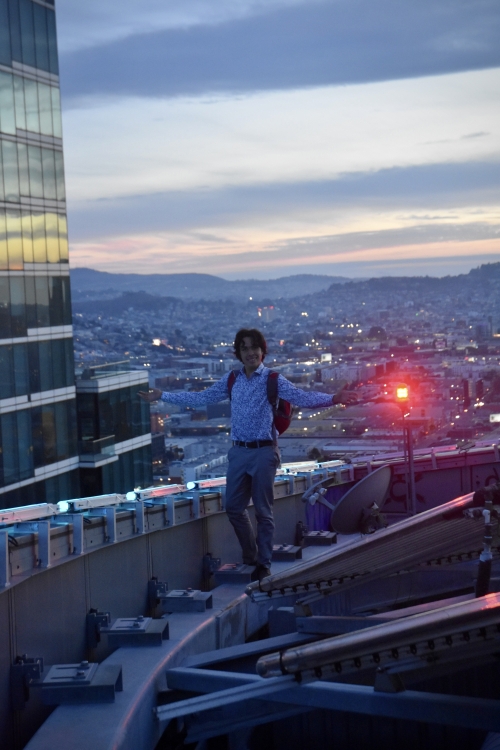 Kimberly
So grateful for a few people today. My coworkers Chris and Eddie who switched up their schedules for me so I could attend my daughter’s volleyball dinner. Their flexibility might not seem like a big deal, but it afforded me the time to celebrate the end of a 7 year journey my daughters have had with CB volleyball. And the coaches, words do very little to express the importance you have had in our lives. It has been a joy to watch you grow, and you’ve basically co-parented Drew these last 4 years and can take some credit in the amazing young woman she has grown into❤️ 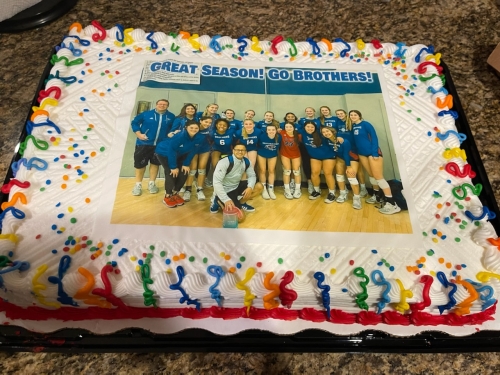 Kimberly
So grateful for a few people today. My coworkers Chris and Eddie who switched up their schedules for me so I could attend my daughter’s volleyball dinner. Their flexibility might not seem like a big deal, but it afforded me the time to celebrate the end of a 7 year journey my daughters have had with CB volleyball. And the coaches, words do very little to express the importance you have had in our lives. It has been a joy to watch you grow, and you’ve basically co-parented Drew these last 4 years and can take some credit in the amazing young woman she has grown into❤️

Cindy
I started a new job on 9/26/2022. The job is difficult, but I have the support of many wonderful colleagues that already feel like friends to me. I had so much stress at my previous job that I was burned out and did not wish to continue there. This job has been a gift from God, and I thank God for sending it my way for as long as I am meant to stay here.
This job is only 7 minutes from my house. It has lessened my stress immensely. I feel blessed to have this opportunity in my life.
Cindy
My counselor is always there to listen and not judge me. I am so grateful he is there to support me when I am struggling.
I have been going through a lot of change lately and he has helped me navigate this when I have felt sad or upset. I feel like he helped me keep going when I did not want to.
Cindy
I am a new employee and they told me they were happy to have me at the company.
I felt very happy and grateful that they went out of their way to drop off an actual paper card to handwrite a note to me.
Andrea
brought dinner, visited, agreed to do favor
Made me feel not alone

Shara
I read the email message sent by this program and watched the video regarding “A Grateful Day.” I am moved by it and shared it on fb.
I feel the gratitude in my body. I actually FEEL it physically. I am slowing down and noticing so many more blessings. I feel an abundance of gratitude.

Maryann
I feel much better today and so does my family. I am happy to be motivated to clean!
I can do much more than I could for almost a week, which dragged out and felt like 2 weeks. I feel like normal and that is so good.

Shara
Mark, my son-in-law, is almost always willing to help me- and he usually ASKS if I need help. Mark saw me walk into the hose with groceries, and asked if he could help. ♥️ He stopped what he was working on to come out in the drizzle to help me.
We connected. 😊 I was given the opportunity to say “yes” to help. I did not have to make a third trip to the car to carry in Tue heaviest of the items.

Shara
It was hard to choose between specific experience or a privilege.
I was struggling with meditation and prayer this morning. I was not feeling super connected and felt very distracted with chores and responsibilities that were waiting for me. I ended my prayer with expressing sorrow about the disconnect and distractions, and also expressed a desire to connect. I decided to quickly read a daily devotional from a book called “Daily Joy” by Russell M. Nelson. The scripture shared made me feel a thing- I felt a tug, a connection. I decided to write a little in my journal about the scripture and feeling.
WOW! I felt an outpouring of love and information! Hi felt and still feel such joy and energy right now!
It may sound crazy to some- and I get it, but this isn’t a still true-
I believe in personal revelation!! I feel so connected to my Heavenly Father and Jesus Christ. I am grateful for this experience of feeling disconnected, expressing the desire to be connected, and having such a quick response to that expression. I am grateful for scriptures, and how easily the can be accessed. I am grateful for this challenge, and an additional place to express my gratitude.
The scripture I mentioned: Doctrine and Covenants 137:9
Connection, I ncrease in faith, positive energy.
Sal
Helped with strategic planning for a non-profit organization.
Felt appreciated

Catherine
I’m so grateful for having a Sunday morning to collect myself, take things slow, and figure my way through a couple of situations and deliverables today.
It’s giving me the reflection time I need that I have been lacking at points this week.

Catherine
I’m so grateful for having a Sunday morning to collect myself, take things slow, and figure my way through a couple of situations and deliverables today.
It’s giving me the reflection time I need that I have been lacking at points this week.

Shara
I had an interest experience while meditating and praying. I recognized an answer to prayer.
I feel more connected to my Heavenly Father. I feel a broadening of my understanding.

Shara
I have been working with this person on some difficult issues. This person thanked me for my help, consistency and patience.
It warmed my heart and it surprised me. It made me think that what I do might make a difference.
rory
For Rafik driving
I don’t have to drive
I have very strong disgust about driving
Luz Alba
doy gracias por mi creatividad y mi capacidad de encontrar lo que necesito
Me permite trabajar mejor en mi hobbie y tener mejor calidad
Antoneta
I had a presentation today at it was very good, was about meaning
I was able to recomgnise I did a great job

Maryann
I offered to make dinner.
I felt happy. I am not a great cook, but there are a few dishes that I like to make. I get excited when
people like something that I made.